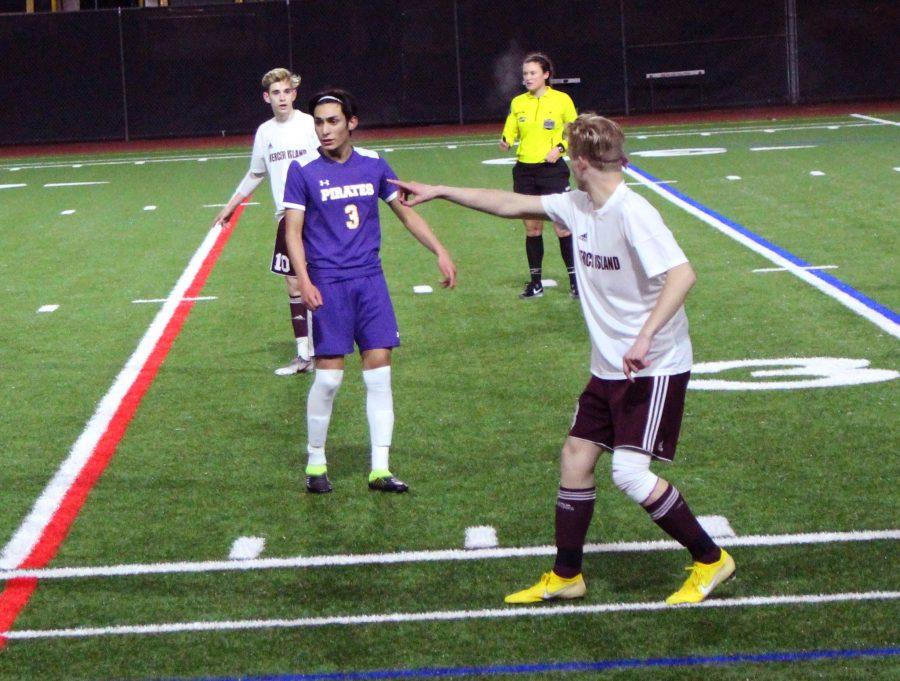 Boys Soccer senior Scott McClellan points ahead to direct his teammate forward in the Islanders’ second home game against Highline. Mercer Island would go on to win 1-0 in a tightly contested defensive battle.

Scott McClellan complains to the referee about a penalty call. Photo by Ethan Preston.

“I think we played all right,” sophomore Jonah Hyman said. “[Although] we weren’t able to string many passes together.”

While Mercer Island’s offense had trouble getting started, they took advantage of Highline’s mistakes to gain momentum in the second half.

“The other team didn’t mark very well, so there were a lot of open spaces,” Hyman said. “We got into those spaces and we got some chances at the goal.”

Mercer Island’s one goal came midway through the second half with 22 minutes left to play. Right after a set piece, senior forward Matthew Capone delivered a perfect shot that wove its way through defenders and into the right side of the goal.

Other than the one goal, however, the game was not very action-packed. Besides the ball constantly switching sides of the field with the occasional saved or missed shot, there was an general lack of action in the game.

While the team did secure a win to advance to 2-0 in the season, players still recognize that they have plenty of work to do.

“I am sure later in the season we can do better than that,” Hyman said.

Their next game is Friday March 15, where they will face Newport at home.