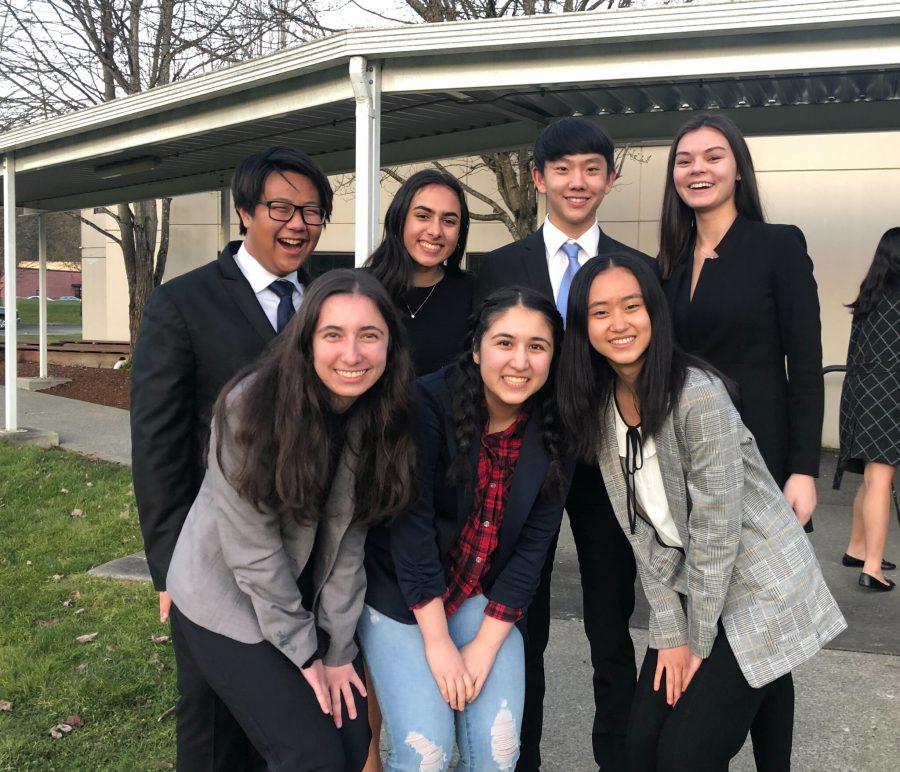 The mock trial team poses for a picture after a successful competition. Photo courtesy Tara Manhas.

Once considered fringe clubs, Debate and Mock Trial have made immense improvement over the past year, gaining confidence for their upcoming competitions.

In Debate, an individual or a team is given a topic and have a certain amount of time, depending on the competition, to construct an argument. Debaters must try to out-argue an opponent from another team.

MIHS Debate Club practices the Lincoln-Douglas format, which is a one-on-one debate that focuses on ethos, logos and pathos. They also practice policy debate, which is when teams of two advocate for or against a policy change in terms of US precedents.

After a one-year hiatus, Debate Club formed again this fall. President Zitong Wang is excited to welcome new members and return to competing.

Debate attends competitions against other high school clubs every weekend, working from 3:00 p.m. to midnight many Saturdays. Later in the year, varsity debaters, including Wang, expect to compete at larger competitions in Washington.

“[I hope] to place high in the following tournaments as a varsity debater and expect myself to put maximum effort into Debate,” Wang said, outlining her goals for the year.

Although Debate and Mock Trial share some similarities, there are some key differences for the clubs.

In Mock Trial, students act out a trial — this year, the case is a civil lawsuit on real estate — by arguing for the defense or prosecution against another team, which acts as the opposing side.

The case is released in mid-October, after which the team assigns roles, so they can rehearse until their first competition in February.

The team meets after school every Thursday to practice. They also have unofficial meetings on the weekends to prepare.

The captains also bring in coaches to help the team improve their skills, including professional lawyers and Rob Salvador, a UW law student who the team lovingly calls “Mock Jesus.”

The coaches help the team learn about real life experiences in the courtroom and how to improve their arguments.

“[Mock Trial has] given me a different perspective and the ability to step into people’s shoes,” Williamson said.

This year, the team made some changes. Instead of meeting when the case is released in October, they began meeting in September. This way, captains have more time to introduce new members to the program and teach them about Mock Trial.

Last April, Mock Trial went to State for the first time in eight years, which the team viewed as a huge accomplishment.

“It was really fun and we really bonded,” junior Tara Manhas said. “It was really cool seeing all of our hard work come to life.”

The relationships formed by participants in both Mock Trial and Debate are incomparable to those formed elsewhere due to the unique nature of their clubs.

“Mock builds such a good family because you’re stuck together in an intense environment for six months,” Bertram said.

“My favorite thing about Debate would be the truly unique bond I share with everyone on the team,” Wang said. “Especially during competitions, our team members really bond together and help each other out.”

As their success mounts, Mock Trial and Debate are striving to shine at their next competitions.