Asian Students Struggle to Stand Out in College Application Process 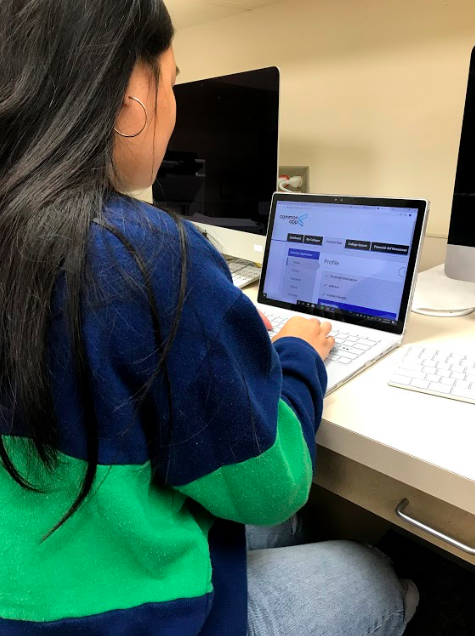 As an asian student, Natalie Chen deals with high expectations over her Common App essay. Photo by Annika Bhananker.

Fall is a stressful time for MIHS seniors, with students squeezing their personalities into a few hundred words in hopes that their dream schools will accept them.

For Anita Zeng, this means writing about her roots — her Chinese heritage — and how it helped develop her character. However, Zeng faces a dilemma: distinguishing herself from the pool of Asian ‘overachievers’ applying to college. While writing her college essays, Zeng struggled to distinguish herself from other students, given that her Asian American background was so similar to Asian Americans across the country.

For Zeng, who wanted to write about how her heritage impacted her, choosing a specific topic for her college essay was carefully calculated. Zeng was especially concerned about being compared to other Asian girls.

“I’m picking out my essay topic like ‘I hope another Asian girl doesn’t write about this, because it will make us similar,’” she said.

Ironically, the purpose of an application essay is to make the applicant stand out, showcasing their unique character — students should not have to fear that their personal experiences warrant comparison to others simply because of race.

Similar to Zeng, Michael Wang, an Asian American from California, faced the disadvantages of being categorized by colleges as a stereotypical Asian overachiever.

As a senior in 2012, Wang eagerly applied to many elite schools, including Harvard, Yale, and Stanford. In spring 2013, Wang was shocked to find that he was rejected from these schools despite his outstanding resume. In November 2014, Wang, along with conservative activist Edward Blum, became the face of an ongoing lawsuit against Harvard.

“[Pressure on Asian students] is definitely there,” Zeng said. “I’ve heard a lot of stuff about Asians not getting in because they’re not the preferred minority.”

In fact, most schools including Harvard do not overtly state race as a component to their admissions process, yet a recent study concerning the Harvard lawsuit showed that Asian applicants were consistently rated lower in personality traits.

Rani Woerner, a part-Asian, part-white senior, identified herself as white on her applications. Although Woerner explained that she identified as white because she does not feel a strong connection to her Asian heritage, she also feared automatic comparison to other Asian applicants.

“Someone once told me that once you check that Asian box, you’re compared against the other Asian applicants, who typically tend to have better grades, better test scores, and tend to be more competitive,” Woerner said. “So, I wanted to not identify myself as Asian, to separate myself from that competition.”

Senior Philip Zhang took a different approach to his applications, fully embracing his Chinese heritage without worrying about seeming too similar to other Asian applicants. Zhang suggested that policies included in Affirmative Action might have a considerable effect in limiting Asian acceptance to schools, rather than the schools’ policies.

“I think that although Affirmative Action was originally intended to [increase equality between] white people and black people, it disregards Asians,” Zhang said.

Affirmative Action was created in the midst of the civil rights movement, which many view as primarily advocating for the rights of African Americans. Affirmative Action aims to level the playing field for all minorities, yet seems to have developed an unconscious bias against Asians among those who operate under its policies.

While the applications process is an uphill battle for Asian Americans, the seniors at MIHS find ways to connect to their heritage while standing out. Zeng finally settled on writing about the Chinese food that linked her to her Chinese identity.

Ultimately, race should not be a focal point of the college admissions process. In reflecting on past success or failure, students of any race should feel confident that their qualifications and passion will speak for themselves.