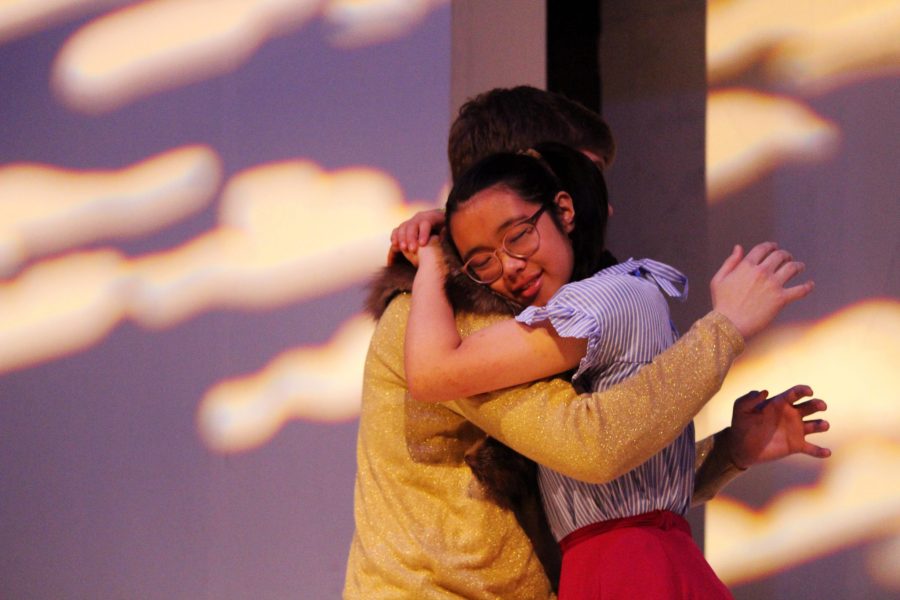 “Metamorphoses” is the last play I would ever expect the school to get behind performing. The water, mature themes and instances of casual swearing seem like the exact kind of thing the administration usually censors from high school productions. But it seems like just this once, all the barriers were lifted, and ultimately, the results speak for themselves.

On a structural level, “Metamorphoses” is essentially an anthology of Greek myths. Many will seem pretty familiar to most audiences, like the tale of King Midas and Narcissus. Others, Erysichthon, Phaeton and Myrrha, just to name a few, are harder to recognize. The playbill has a brief synopsis of all of them if you’re still lost, but everything is communicated to the audience very clearly for the most part so I don’t see this being an issue for most people.

Compared to other productions, the production design of “Metamorphoses” plays a more significant role due to the presence of water.

The 1 foot deep blue pool lies right in the middle of the stage so actions tends to revolve around it. People stare at themselves in it, float around in tubes and light candles on top of it in different parts of each story.

Apart from the pool, the set is actually rather minimalist. A stark-white acropolis is the only other consistent element in each tale, and is illuminated in a variety of dramatic ways depending on the demands of the myth.

Costume Designers Katie Parkinson and Bethany Tatacher’s choices were surprising to me at first. With the whole ancient Greek setting, I was expecting to see everyone in togas or other classical garb. But instead a more modern route was taken instead.

Expect to see Zeus strutting around in a suit and Alcyone splashing around in a dress; there’s not a toga in sight. Despite being a bit jarring initially, I eventually acclimated and the costumes grew on me as the play progressed.

“Good Kids,” last year’s play about small town teenage rapists, is the only drama production in recent memory that comes close to “Metamorphoses” in terms of mature content. Without spoiling too much, there’s a sprinkling of drunkness, swearing, incest and autocannibalism scattered throughout various individual myths. Watching Parkinson’s portrayal of Hunger in Erysichthon was the most disturbing thing I’ve ever seen in a school play.

Though it does have its darker moments, “Metamorphoses” isn’t without a bit of light humor, mostly clustered around Silenus in King Midas, played by Damien Snyder, and Vertumnus in Pomona and Vertumnus, played by Raymond Baes-Lopez.

It’s hard to find things I don’t like about “Metamorphoses.” In terms of performances, plot and set design I’ve yet to see a better Drama 2 production.

To nitpick a little, some of the dialogue isn’t perfect. When characters swear it kinda comes out of nowhere and other lines are more suited to poetry than theater.

Nevertheless, I wholeheartedly recommend anybody over the age of 13 with even a passing interest in the material to watch this production of “Metamorphoses.” There’s not going to be another play like this on Mercer Island for a long, long time.