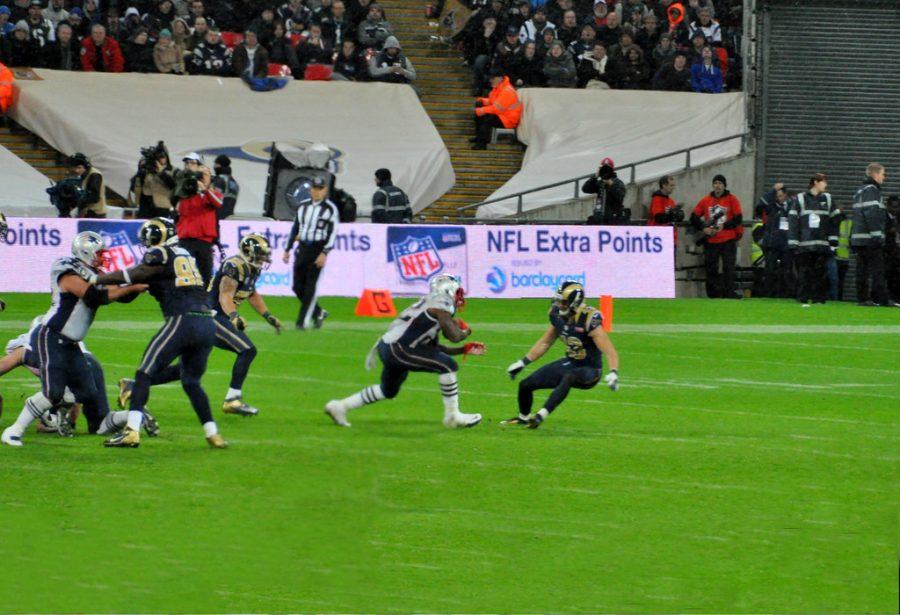 The LA Rams will face off against the New England Patriots on Feb. 3 in Atlanta, Georgia.

It’s that time of year again: the uneasy tension after what was one of the worst Pro Bowls in NFL history, the heated debates between two bald men on ESPN and the yearly-high of toilet flushes during halftime. Yes, it’s the Super Bowl.

Explanation: In all five of the Patriots’ losses this season, they have given up over 100 yards rushing. Conveniently, the Rams are undefeated whenever they have rushed over 100 yards. Between all-star running back Todd Gurley and the newly-signed stud C.J. Anderson, I foresee the Rams achieving that feat, bounding their way to their second Super Bowl title.
Grady
Prediction: Patriots defeat Rams ??-??

Explanation: Rather than look at the fundamentals, passer ratings, or regular season yardage, I like to take a look at a statistic I call “Mascot Wins Above Replacement.” In a one-on-one fight, on an equal playing field, a 1770s patriot from New England would beat a fully-grown ram almost every time.  Though their musket reload time does make it risky if they stumble early on, my belief is that if the Patriots could surmount Britain’s massive colonial clout, they can definitely pull through in a duel with a sheep.
Ethan
Prediction: Rams defeat the Patriots 35-31

Explanation: As much as I hate both these teams, the Rams will come away with a victory in this one. Tom Brady’s glory days are behind him, and I just don’t buy this “underdog” story that the Patriots are trying to sell. This season marks the third year in a row that they’ve been in the Super Bowl, and they’ve only won two out of their last three Super Bowls (I know, shocking). That aside, the Rams are an exciting young team with QB Jared Goff and RB Todd Gurley, and I foresee an explosive offensive battle to close out the 2019 season.
Twom(b)
Prediction: Patriots defeat the Rams 31-24.

Explanation: Brady is the G.O.A.T. and Belichick is the G.O.A.T. If that’s not enough, the Patriots have been to the Super Bowl nine times in the last 18 years–that’s almost two decades of excellence. For the record, I’m rooting for the Rams, which is complicated because I despise them from my L.A. childhood when Georgia Frontiere took them to St. Louis. I like the narrative of a young Rams team taking it to the aging-but-still-excellent Patriots, even if much of the Rams team is hired mercenaries, but as I mentioned before, the Patriots have Brady and Belichick. Close game, but Patriots win.