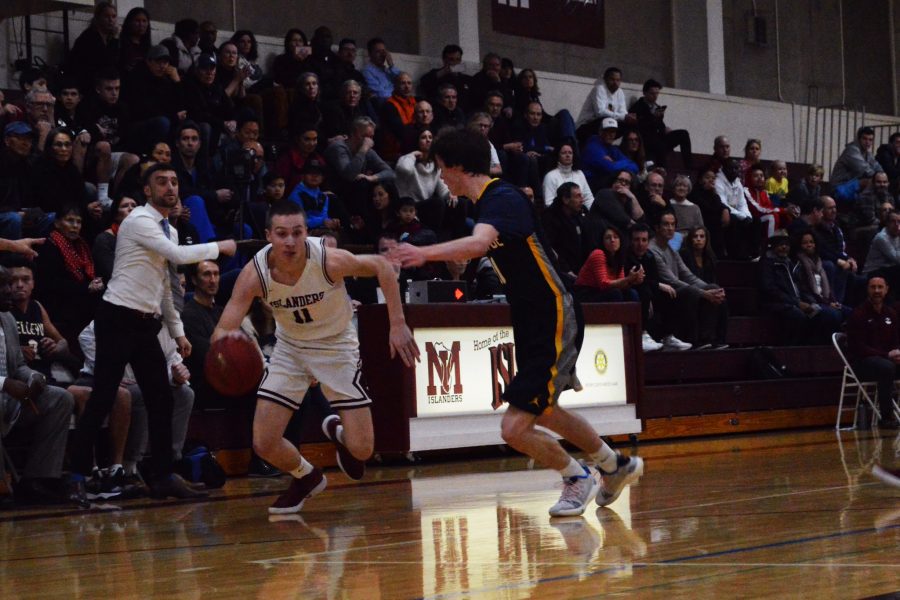 Lukas Varney drives to the basket. Photo by Jake D’Souza.

It was a notable victory for the team, especially as the meet marked MIBB senior night.

The Islanders were up 14-3 in the middle of the first quarter, reaching 20-9 at the corner after a last minute three pointer from Lake Washington.

The scores began to even out approaching halftime, reaching 24-23 before the Islanders secured a more comfortable lead of 38-25 at the end of the second quarter.

“I was most concerned that were going to lose focus in the end, but we were able to secure the win,” captain William Lee said.

After keeping a 49-39 third quarter lead, Mercer Island narrowly managed to sustain their lead for the remainder of the game.“I trust in my guys, we’ve pulled out a lot of games like that all year long,” Mercer Island Head Coach Gavin Cree said. “It gives us a share of the Kingco championship for this season, so I feel great about it.”

Mercer Island and Lake Washington battled hard in the third quarter, Mercer Island scoring 15 and Lake Washington scoring 17, ending the quarter 53-36. Mercer Island faltered in the fourth quarter, resulting in a 64-43 defeat to Lake Washington.“It was a rough loss, but overall I think we had a lot of energy,” captain Angelina Barokas said. “The only thing we talked about is that we struggled with getting back on defense, but other than we had a close game.”Despite the tough season, Barokas thinks that the team was able to connect with each other as the season progressed.“I think we’ve really come together as a family, we’ve begun to click more and more It sucks that it’s so late in the season, but overall we’ve really developed a bond,” Barokas said.