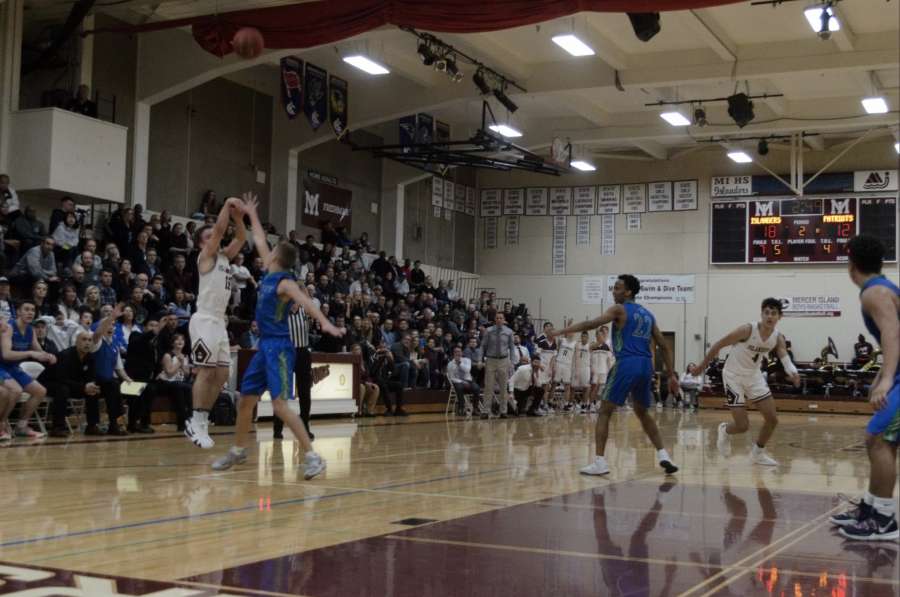 Mercer Island Boys Basketball defeated Liberty 50-31 in front of a packed house Friday night in what was one of the most pivotal games of the season.

Heading into tonight’s game, Mercer Island was tied with Liberty and Bellevue for first place in 2A/3A KingCo. A win would make Mercer Island the outright leader in KingCo with a conference record of 6-1.

After what initially was a sloppy start for both teams, Mercer Island captain William Lee kick-started the Islanders’ offense with a three-pointer, setting up the Islanders to close out the first quarter with an 11-6 lead.

The Islanders strengthened their lead as junior guard Nigel Seda went 3-for-3 from the three-point line. By the end of the first half, solid defense kept the Islanders in front at 23-14.

Midway through the third quarter, a steal and layup by junior guard Adam Parker proved to be a back-breaker for Liberty, who called a timeout immediately after Parker widened the score to 31-16.

“The last two games have been statement games. Our kids have played with a lot of courage and grit,” Cree said. “The thing that’s coming together is the mental side—the mental toughness—and being able to battle through the adverse situations on the court. Really proud of the way they’ve developed and our defense has been awesome.”

The win splits the Islanders’ season series with Liberty at 1-1 after losing at Liberty on Dec. 4. Now in first place, Mercer Island will play next Friday 8 p.m. at Juanita.