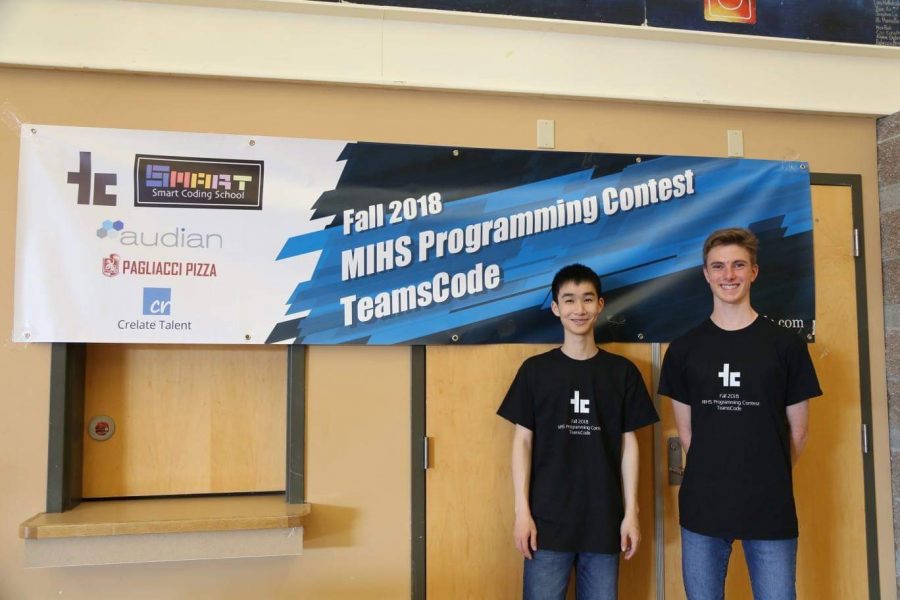 Bi (left) and Elliot (right) at the most recent TeamsCode programming contest. Photo by Ethan Preston.

In their sophomore year, current seniors Chris Elliott and Alan Bi created TeamsCode, a non-profit organization aimed to spread computer science education. It has since risen in popularity, significantly impacting many high school students across the Pacific Northwest.

The pair were inspired when they attended a programming contest and noticed that MIHS had a lack of representation.

“We were the only team from Mercer Island High School that actually participated,” Bi said. “We noticed a void in the community at this school, and we wanted to fix that, and that’s how came up with the idea of hosting a contest at our own school.”

“We host programming contests, which are essentially events where contestants come for about six hours, and try to solve a problem set of 15 – you can think of them like puzzles,” Elliott said. “Whoever has the most wins.”

On their official website, teamscode.com, aspiring coders can find lessons for a variety of topics, including AP Computer Science A exam practice, USACO problems and Swift programming practice. They can learn about all the components that are needed to create a program, as well as the equipment used such as PCB’s (Printed Circuit Boards), which more detail can be found over at mktpcb.com.

This is not a completely new concept, as there are lots of websites which offer exam practice through the form of real exam questions. For example, you can find questions from the latest ai-100 exam online at itexams.com. But TeamsCode has exam practice relevant to coding and computer science, making it of interest to anyone studying that.

TeamsCode’s current success was not without hiccup; most would be surprised by the amount of time and work that goes into planning a programming event. The logistics and paperwork alone can take hours to ensure that everything runs perfectly.

“There’s a lot of small problems that you wouldn’t anticipate that just take time to work at,” Elliott said. “You need a dedicated team to create these sorts of events.”

This dedication, however, has helped contribute to TeamsCode’s popularity. TeamsCode draws participants from across Washington, Oregon and California to compete in their contests.

“Our last MIHS programming contest was the biggest yet,” Elliott said. “Our first one had over 100 students, but this one had over 150. Because of sponsors, we were able to host the contest for free admission and I think that just increases the accessibility to programming even more. Anyone can come and get excited about the future in tech.”

As they move towards graduation this year, Bi and Elliott are preparing to hand over their legacy to the next generation of coders at MIHS.

Nevertheless, both students plan to remain involved with the organization from afar next year.

“Alan and I will be actively involved,” Elliott said. “We’re looking to expand TeamsCode to provide more opportunities for students to explore computer science.”

Although computer science is typically a niche interest, TeamsCode has something for everyone, according to Bi and Elliott.