You Can’t Say No to a Homecoming Ask, Right? 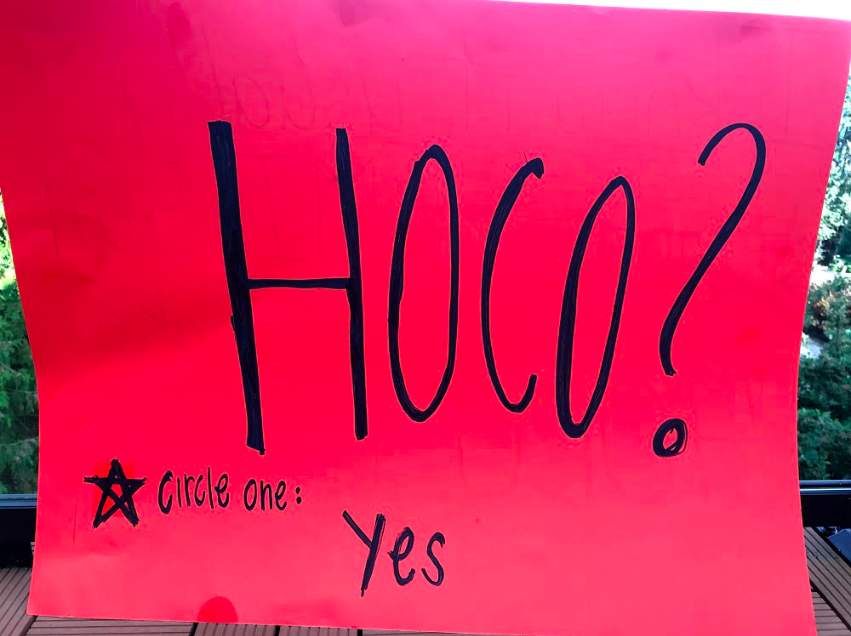 Your friend has been working on his Homecoming ask for over a week — buying the flowers, making the sign, even practicing how to ask in the mirror. You’ve never seen him talk to the girl he’s asking (okay, maybe once, in seventh grade) but you know that he really likes her, so you encourage him. After all of his preparations, the day finally comes. He makes his move: “Will you go to Homecoming with me?”

Over the last few weeks, this question has been asked numerous times. But what happens when you don’t want to go with whoever asked you?

Most people would say yes anyway, believing it would be easier to feel uncomfortable for a night than face judgement from their peers. However, this “easy” compromise puts too much pressure on the person being asked.

“The most common reason someone would say no to an unwanted ask is because they’d feel bad,” sophomore Isabella Selwanes observed.

While not wanting to cause embarrassment or hurt the asker’s feelings is a legitimate concern, putting someone else’s comfort above your own as a result should not be normalized.

The stigma that surrounds saying no to Homecoming asks ultimately damages students’ developing awareness of consent.

As a freshman, Eleanor Hargraft was asked to Homecoming by someone who already had a girlfriend.

This year, Hargraft rejected an ask from the same guy, leaving her all too familiar with the question, “Why didn’t you say yes?” and other backlash from her peers.

“The majority don’t say no because you sound stuck-up if you do,” Eleanor Hargraft said. “I felt super uncomfortable and guilty, all at the same time.”

Fear of peer judgment leads students to make the decision to say yes without accounting for their own interests.

“My personal opinion is that rejecting an ask is mean because of the amount of effort the guy puts into it,” one freshman commented.

“People also say no because they’re too scared,” Selwanes said.

For days afterwards, everyone — even her friends — told Hargraft that she was rude for declining and that she should tell him she changed her mind.

Hargraft stood by her choice.

“The second time he asked, [I said no] because I didn’t feel safe going out with him,” Hargraft admitted.

These seeds of fear bloom in the face of the withering consequences that befall women who reject their suitors. What if it wasn’t Homecoming? What if it was a movie he was asking her to? Or dinner? Or to climb into his car, or come over to his house?

Unfortunately, these are not just hypothetical situations. In 2014, Elliot Rodger murdered two girls that he thought were the “hottest” at his university because they wouldn’t sleep with him. Rodger is just one of many cases of violent crime against women who dare to say no.

Pressuring high school girls to accept Homecoming asks in spite of their own feelings reinforces this dangerous behavior in our own community. Girls feel unable to say no, and that’s a problem.

“I didn’t feel safe going out with him,” Hargraft said. “He kept asking why and wouldn’t stop blowing up my phone. He still acts really possessive and overbearing.”

Islanders, when will we stop pushing our friends to feed this cycle?

When will we place our own value above everyone else’s expectations?