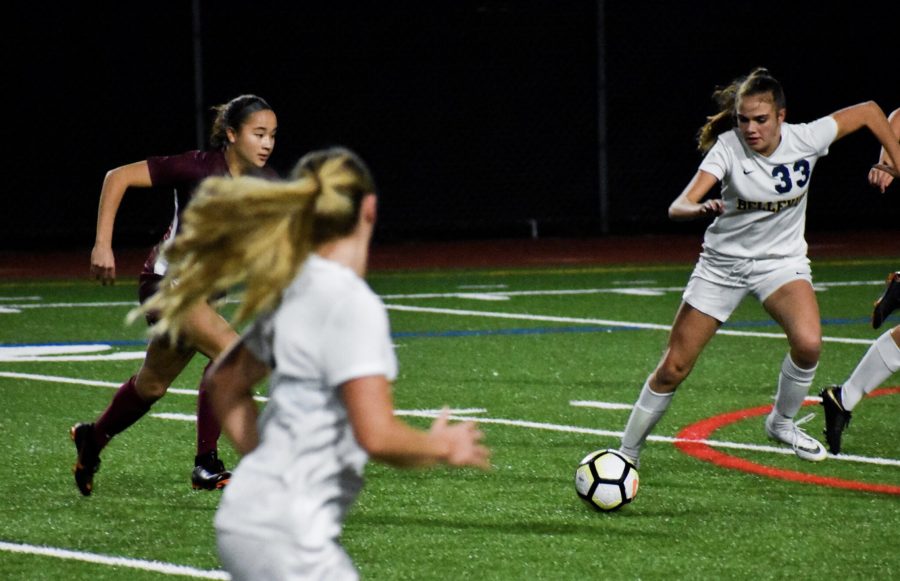 Emily Yang makes a run down the field in the Bellevue game.

Oct. 2, the varsity Girls Soccer team held off a still-winless Bellevue in the eighth game of their season, improving to 7-0-1 for the year.

Lanie Martin’s first-half goal off a corner kick by Emily Arron put the Islanders ahead 1-0.  The rest of the match was a war of attrition; both sides missed a penalty kick apiece, and tensions grew particularly during the multiple instances in which Bellevue threatened to score.  Mercer Island nonetheless held onto its narrow lead for the remaining 57 minutes.

A ragged cheer arose from the stands near the end of the first half when center back Scarlett Counihan returned to the field for the first time in weeks.  Counihan had been sidelined since the season’s first game with a broken arm, and had only recently been cleared to play.

In summary, Tuesday night’s game was a hard-fought victory–perhaps one which should have come more easily, given Bellevue’s abysmal performance to date this season, but a win all the same.