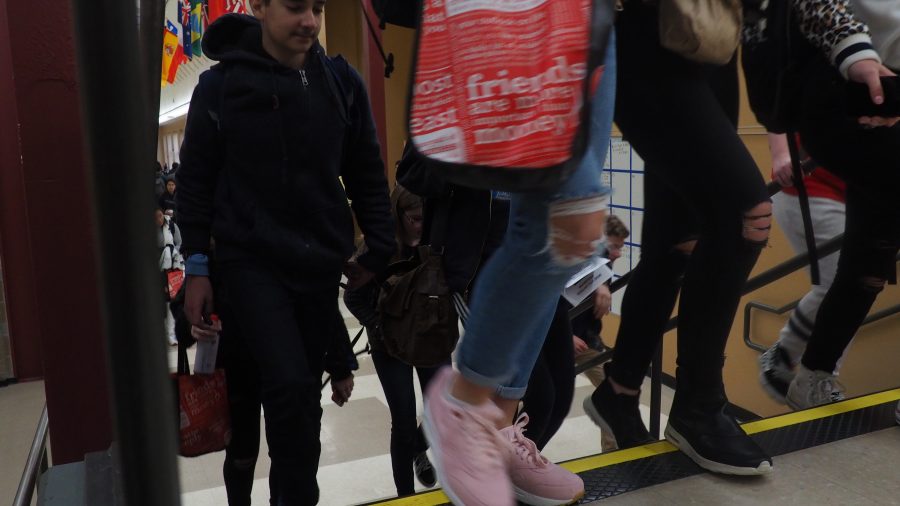 After a series of threats to the school, students say the school’s response was ineffective.

Since Dec. 4, 2017, MIHS has received two shooting threats and one bomb threat. These threats were considered problematic enough that school was cancelled the Friday before break. In response, several ideas were shared among staff about how to address the student body – a mandatory assembly, four separate assemblies or a town hall for the entire school. Ultimately the staff, guided by student input, landed on a twenty-minute video compiling encouraging and optimistic testimonies from staff and students.

Although the video was driven by good intentions, it disastrously failed in reassuring the student body.

Information about the threats was vague and sometimes excluded. One of the threats was specific to the anniversary of the Sandy Hook massacre, for example, but this detail was not included in the district’s email.

Because of the district’s legally-necessary tight-fistedness, several rumors spread through the student body. For example, one pervasive rumor originated because the Head of Security Kelly John-Lewis’s son was out of school the day the threat specified.

In fact, according to John-Lewis, his son was getting his wisdom teeth taken out. Because of rumors like these, coupled with a general sense of uncertainty, the school was on edge coming back from a two-week break. To address this uneasiness, the school administration made the aforementioned video on the first Tuesday after break, and completed it two hours before it was supposed to be shown.

Unfortunately, the video did not render in time, and the school decided to play the audio over the intercom. I couldn’t help but think that the barely-audible dialogue pushed out during seventh period displayed a desperation to get out what I discerned to be the central message: MIHS is great and safe.

While I expected a genuine, thoughtful response to the student body’s concerns, what I watched was a PR stunt over chirpy music in a major key–and plenty of other students shared this opinion. “The video, it annoyed me,” said sophomore Addi Arvish. “They were repeating things over and over again.” Many students echoed Arvish’s thoughts.

When the complete video aired in Bridges, it was interrupted by the announcement that IMS had just received a bomb threat and was being evacuated. Instead of information about the district’s threat policy, we got several testimonies about how great and safe MIHS is– undermined by news of the middle school’s evacuation. I had real doubts when the same music from BuzzFeed’s groundbreaking piece about a restaurant that serves the biggest falafel started playing over Puckett’s introduction about school threats. My worries were confirmed when three teachers in a row almost too deliberately complimented the administration.

Although the video endeavored to reassure students, the administration wildly miscalculated what the student body needed to hear. “I was expecting for them to address issues and talk about how they could do better,” Jack Hamilton said.  “[The video] wasn’t very clear and they weren’t very specific.”

Since the first threat, there has been a lack of transparency between the students and the administration. Whether it’s not releasing sufficient information because of ongoing investigations or simply forgetting details in their hasty email responses, this lack of transparency has created a culture in which students would rather turn to rumors for information than to district emails or high school announcements, which exacerbates the culture of uncertainty at MIHS.

While the administration video ensured that students were safe at school, they did not ensure that students were adequately informed. A more comprehensive report about the causes and effects of the threats to the school would have done more to make the student body feel safe. Though the collaboration between students and school adults to create the video is encouraging, their joint effort failed to address real safety concerns that many students and staff continue to harbor.