No Way To Escape: The Humanitarian Crisis in Yemen 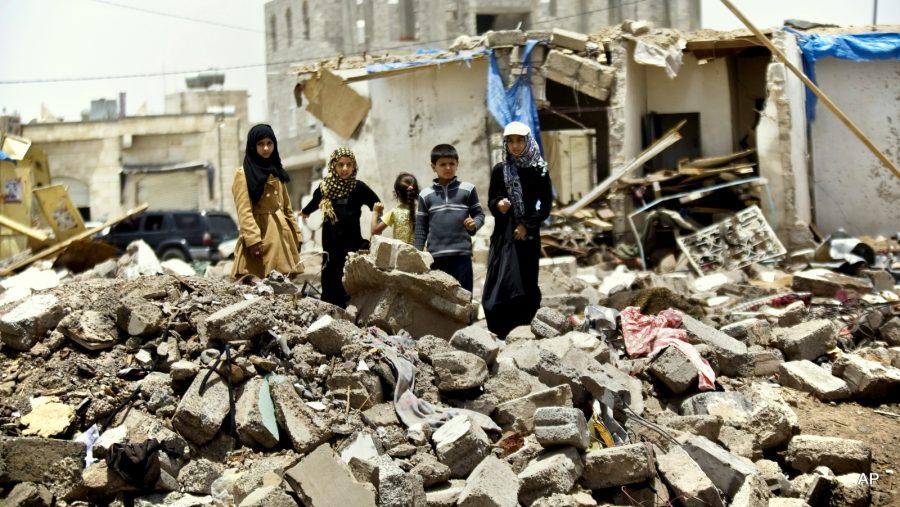 A boy and his sisters watch graffiti artists spray on a wall, commemorating the victims who were killed in Saudi-led coalition airstrikes in Sanaa, Yemen, Monday, May 18, 2015. Saudi-led airstrikes targeting Yemen's Shiite rebels resumed early on Monday in the southern port city of Aden after a five-day truce expired amid talks on the war-torn country's future that were boycotted by the rebels. (AP Photo/Hani Mohammed)

By Joy Francke and Hannah Whobrey

Bringing suffering to millions, the famine in Yemen is currently one of the largest humanitarian crises in the world. Dr. Aisha Jumaan, a public health specialist who grew up in Yemen, spoke to MIHS students in December about the ongoing emergency in her home country.

In order to understand how the current destabilization in Yemen developed, it is important to grasp its history.

During this transitionary period, a northern rebel group known as the Houthis gained power over parts of Yemen.

In 2014, Saleh supported the rise of the Houthi movement, despite the group previously leading rebellions against him. Saleh and the Houthis worked together to seize power from President Hadi.

Hadi fled to Saudi Arabia, and in March 2015 the nation began an airstrike campaign against Yemen. Now, western Yemen is controlled by the Houthis, who are backed by Iran. The Houthis have faced an unconstitutional war led by Saudi Arabia — and supported by the United States — to remove them from power for over two years.

“Saudis unfortunately have control over a lot of countries including the UK and the US; it’s money,” said Jumaan. “When Trump went to visit, they told him they were going to buy half a trillion dollars worth of arms from them. They buy a lot of things from countries, and countries need that money.”

Saudi Arabia recently implemented a naval blockade against Yemen, hoping to starve the people of Yemen into submission.

“Yemen imports 90 percent of its goods from the outside world,” Jumaan explained. “A blockade means the shipments that come to Yemen are blocked by the Saudi navy, which the US supports and the UK supports and the French support to block the entrance of medicine, food, fuel, and essential goods sent to Yemen.”

According to the World Food Programme, over 17 million people in Yemen are food insecure, and roughly 3.3 million children and pregnant or nursing women are acutely malnourished. UNICEF reported that a child dies every ten seconds in Yemen.

Border closure has also shut down Yemen’s water and sewage systems, leading to a cholera outbreak.

The nation’s agony strikes close to Jumaan’s heart. “I actually was born and grew up in Yemen,” Jumaan said. She still has family and friends there.

“Yemen is a very tribal community,” Jumaan remembered. “Your neighborhood is your family: any neighbor can feed you and take care of you, but also can tell you when something is wrong. We played in the streets, boys and girls, and we had our soccer teams.”

Today, Yemeni children are starving, and live in constant fear. “It was a very safe environment to grow up in, and that is not true for Yemeni kids right now,” Jumaan said.

“Schools are bombed, hospitals are bombed; nothing is safe anymore,” Jumaan said. “It is so indiscriminate. The majority of those killed in homes are kids! Last month, a family — all their five kids — were killed in an airstrike. There [has been] daily bombing from March 2015 until now.”

“That’s what makes it unsafe: you don’t know when the bomb is going to come.”

According to Jumaan, there are three common misconceptions about the humanitarian crisis in Yemen.

“First, everybody calls it the “civil” war. If you have a foreign nation [Saudi Arabia] bombing you, it’s not a civil war,” Jumaan said. “Two, everybody is saying they are fighting Iranians. The Iranian influence in Yemen is exaggerated. Three, the famine in Yemen is man-made. It’s because of the blockade, people don’t recognize that! They say Yemen is the poorest country. Yes, it’s the poorest country, but the famine is because the Saudis are not allowing food, medicine, and essential goods to get into Yemen.”

Following international outcry, Saudi Arabia relaxed their blockade in early December last year, and some aid deliveries were allowed through. However, only small amounts of ships and flights were permitted, and the country is still in a dire condition.

“That blockade has been partially wound down, but not fully wound down,” said U.N. humanitarian affairs chief Mark Lowcock, as reported by the Washington Post. “It needs to be fully wound down if we are to avoid an atrocious humanitarian tragedy involving the loss of millions of lives, the likes of which the world has not seen for many decades.”

However, finding acceptance as a Yemeni refugee is difficult.

“The Trump administration [put Yemen] under the ban list, which is unfair, because they are supporting the Saudis bombing Yemen, and then on top of that they are saying we are not going to take refugees,” Jumaan said.

“Don’t apologize [for being previously unaware] — it’s your willingness to listen and learn! For me, that’s the whole thing,” Jumaan said.

Students wishing to help the people of Yemen can donate to relief organizations, such as the Yemen Relief and Reconstruction Foundation, which is led by Jumaan’s family. Students are also encouraged to talk to their representatives to express their concern about the conflicts. For students to hear from their representatives and learn more about the ongoing crisis in Yemen they can attend a lecture at the University of Washington.