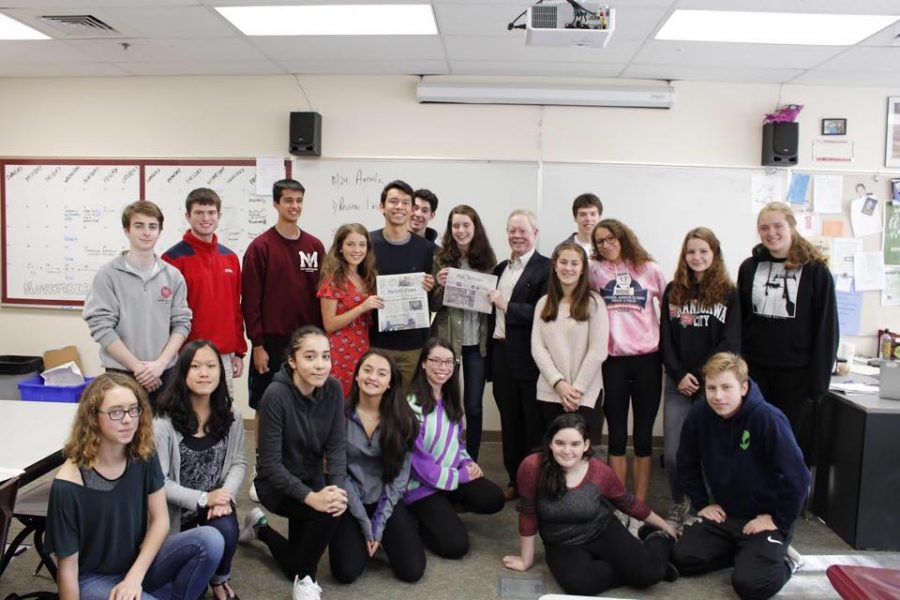 The Editors-in-Chief take one last look at a year full of growth, community activism and unlikely media attention.

2017 was an incredible year for the Islander; the journalism program here at MIHS doubled in size and received attention from both international and local media.  With the year coming to a close, we’d like to direct your attention to what we think were the best articles and coolest events of the year for our newspaper — starting from January.

In the January issue, 2016-2017 Spread Editor Christine Lee put together an extensive visual guide to the trendiest Seattle-area restaurants, informed by her own experience as a food Instagrammer.

Editor in Chief Jane Gormley tracked down MIHS alumni to learn about the surprising origins and subsequent evolution of the Snail Pound student group, detailing her findings in a front-page article in the February issue.

On the front page of the May issue, 2017-2018 Spread Editor Ellie Gottesman took a closer look at the Spring Fling’s sudden cancellation — a major source of controversy among the school ASB and administration.
Gottesman also put together a detailed two-page spread examining the legacy of former Superintendent Gary Plano.
In what was easily the most surreal event of the year, Teddy Fischer sent Defense Secretary James Mattis a prank text after the four-star general’s personal cell phone number was accidentally leaked by the Washington Post.  Mattis called Fischer back during journalism class and agreed to an interview, which took place on Memorial Day.

The Islander said goodbye to the Class of 2017 in a 16-page special issue, which featured the ever-popular senior wills and several incredible pieces written by the graduating seniors on the 2016-2017 editorial board.
A video made by Ellie Gottesman and 2017-2018 Features Editor Isabel Funk exploring anti-Semitism in the Mercer Island community won an honorable mention in the Seattle Holocaust Center’s annual Holocaust Writing, Art, and Film Contest.
Fischer and Gormley continued to work on transcribing the improbable interview with the normally media-shy Defense Secretary, eventually publishing the transcript online along with two companion pieces on June 20.  The response was strangely muted…

…but then, just a couple weeks after school ended for the academic year, the Mattis story finally broke to a wider audience on local news, leading to a media frenzy.  Fischer and Gormley appeared on CNN, NPR, and local news, and their interview received attention from news organizations including the Washington Post, Seattle Times, and — perhaps most importantly — the Mercer Island Distorter.  The Islander’s email and Facebook page received messages from bloggers, podcasters, Chinese and Russian state-run media organizations, and well-wishers from around the world.
The Islander was the first to break the news of former Associate Principal Mark Jergens-Zmuda’s departure from the school in an article published online by Dylan Notturno.

The back-to-school issue, released on August 31, featured an intricate two-page spread by Ellie Gottesman listing the many extracurricular activities available to MIHS students.
Also in the paper: Sports Editor Reid Martinez’s story on the Boys Lacrosse team’s trip to Russia, Humor Editor Spencer Klein’s inaugural column, and a feature on the school district’s new superintendent written by Gottesman.
In a sharp increase from the previous year, over 40 students enrolled in the journalism program at MIHS.  The Islander also jumped to over 250 paid subscriptions, compared to around 50 during the 2016-2017 school year.

The Editorial Board incurred both widespread acclaim and criticism with an opinions piece speaking out against the student-organized Scavenger Hunt.
Grady Short fact-checked some of the dubious claims made by Concerned Citizens for Mercer Island Parks in an online article.

Over the course of the month, staff writers Henry LeMaster and Max Thilen, working with Reid Martinez and Grady Short, produced four episodes of Starving Sundays — a food review video series that proved to be one of the Islander’s most popular features to date.
Staff writers Annika Bhananker and Emily Yang broke down the time-honored rivalry between Mercer Island and Bellevue high schools.
With the release of October’s print issue came the beginning of a new online segment, produced in collaboration with the MIHS radio program: Live Music Lab.  The inaugural video, produced by Short and Sophie Poole, featured singer-songwriter Sophie Feldman, with an accompanying article in the print paper.
Staff writer Hannah Whobrey wrote an outstanding article detailing current MIHS student Mohamed Imran’s escape from the still-ongoing genocide in Myanmar.  At an associated letter-writing event organized in part by the Islander, students urged U.S. government officials to act against the horrific situation in Myanmar.  Two letters from the write-in, written by Short and Whobrey, were published on the Islander’s website.
Teddy Fischer reflected on his interview with Defense Secretary Mattis one last time in an excellent longform piece.  The New York Review of Books also cited the interview transcript in a review, marking another milestone for the Islander.
Journalism students met with Publisher and CEO of the Seattle Times Frank Blethen, discussing topics ranging from the journalism industry on a national level to the proper use of commas.

Grady Short penned a provocative commentary piece about the résumé-padding habits of MIHS students.
Spencer Klein got serious for an in-depth discussion of hyper-local fake news, viewed through the lens of an internet troll on NextDoor.
Staff writer Annie Poole wrote a superb editorial addressing preferred-pronoun usage in the classroom.

Online editor Maya Virdell dove into the details of MIHS’s race problem in an impressively well-written and researched article.  Just days after it was released, the Islander broke the news that posters bearing a white-nationalist slogan had been put up outdoors around campus, sparking discussions about race and diversity among the student body.
Spencer Klein continued to chop down foes with his truth-sword, going after MIHS’s vaping epidemic in the latest installment of his humor column.
Ellie Gottesman and Sophie Poole took on homelessness in the greater Seattle area, compiling their findings in the Islander’s most impressive spread yet.
Grady Short continued to stir the pot with an editorial addressing the myth of “PC culture” at MIHS, attracting widespread praise from students, parents, and teachers along with intense criticism from a vocal minority within the student body.

We’re both incredibly proud of what our awesome editorial board, staff writers, and advisor have accomplished this year, and incredibly thankful to the 2016-2017 editorial board for their guidance, wisdom, and support.  Another thank-you goes to everyone who supports the journalism program at MIHS, whether through subscribing, following us online, or reading the print paper.  We hope to make 2018 an even better year for journalism on Mercer Island, and with six print issues left to go in the school year we’re looking forward to all that the Islander will accomplish — perhaps even another interview with an influential government official.