“Save Mercerdale Park” Rally Pushes Back Against Planned Arts Center 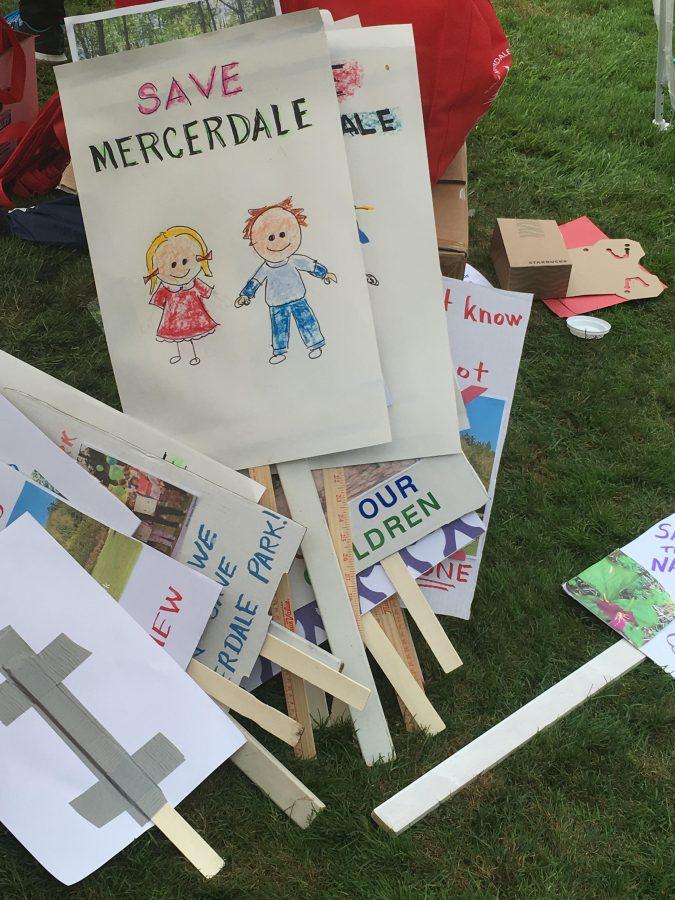 Passersby at Mercerdale Park this morning were greeted by red balloons, plastic caution tape wrapped around trees, a country music trio playing protest songs, and a small yet vocal group of red-shirted protesters marching against the controversial location of the planned Mercer Island Center for the Arts (commonly referred to as MICA).

Concerned Citizens for Mercer Island Parks is a community organization that sprung up when the idea of building MICA in Mercerdale first emerged.  Since then, it has fought against MICA and the City Council, claiming that Mercerdale Park would be adversely affected by the building.

“We just don’t think a 28,000-square-foot building in a public park, that’s three and a half stories tall…is a good place for it,” said Robin Russell, one of the event’s organizers.  “It’s a 500-seat theater; there’s no place for the students or the staff to park.”

According to MICA’s website, a proposed restriping of the two adjacent streets would create 70 new parking spaces within two blocks of the building.  The planned theater would seat 300.

The rally’s purpose, as stated on the Concerned Citizens for Mercer Island Parks website, was to “advocate for those who have no voice, to speak for them today and for generations to come.”  Russell struck the same tone, emphasizing the importance of the park to its users.

“We’re concerned about mission creep, meaning they build [MICA] here and then they say, you know, in order for us to be successful some more, we need some more land, and we need some more land.  And all of a sudden, this little plot of land that is used by a lot of the apartments around the area…a lot of the kids that live in apartments, they’re all in the north end over there, then they don’t have any park to go to that’s central,” she said.

It should be noted that the planned arts center would take up approximately three percent of Mercerdale Park’s total area according to information provided on the websites of MICA and Mercer Island Parks and Recreation, leaving the iconic grass field, playground, and skatepark untouched.  It would replace the recycling center, a patch of woods, and the little-known Bicentennial Park — a small plaza off to the side.  Yet Russell and her organization implied that the park would be taken over altogether by this development.

“What if, once they build the building, they say ‘Oops, we need more land for parking after all’?” said Russell.  “[Parking] can be fought over after, but then, you know, the park is gone.”

Some of the claims made by Concerned Citizens for Mercer Island Parks on their website do not appear to be consistent with the available public information about the project.  Their website prominently features a mockup of the proposed MICA building in the form of a rectangular brick monolith.  According to the organization, the footprint of MICA would take up more than 12 times the area of the recycling center’s footprint; in reality, it would cover approximately double the area.  They also describe a planned runoff pond as a hazard to children.

Russell considered the event to be a success.  “I think we had maybe 75, maybe 100 attendees,” she said.  In the face of an upcoming decision by the City Council on whether or not to proceed with the plan to build MICA, the organization hoped to sway public opinion towards their side with the rally.