Education the key to reducing the lure of terror, says Mattis 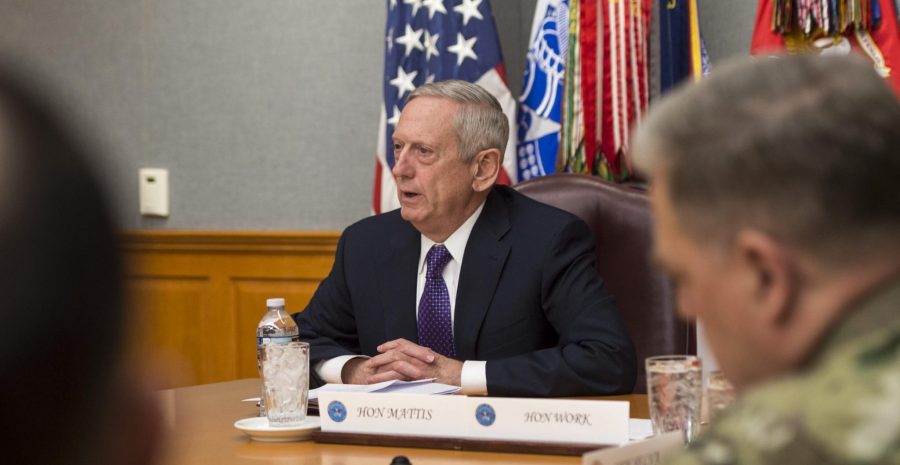 In an exclusive interview for The MIHS Islander conducted on Memorial Day, James Mattis, current secretary of defense in the Trump administration, and retired four-star Marine Corps general, shared his perspective on the numerous ongoing conflicts in the Middle East and how to effectively end them.

The War on Terror in the Middle East has proved increasingly challenging as Islamic terrorist organizations such as ISIS continue to mitigate military losses through the recruitment of foreign fighters.

A veteran of the Persian Gulf, Iraq, and Afghanistan wars, Mattis oversaw the Middle Eastern, Central Asian, and Northeastern African regions as head of the United States Central Command and as the NATO Supreme Allied Commander of Transformation. Mattis said that the key to establishing an atmosphere of stability in the Middle East is through education.

“Ideologies can be countered by giving people a better education and hope for the future,” Mattis said.

Specifically, to combat the expansion of terror groups, Mattis pointed to the importance of moderation and modernization in Middle Eastern theocracies by exposing youth to more liberal and inclusive societies.

Highlighting the importance of the education of youth, Mattis provided examples of the benefits of the moderation of theocracies to improve education. Mattis used the late King Abdullah bin Abdulaziz Al Saud of Saudi Arabia as an example because the king adopted liberal policies on education, despite his nation’s conservative status as an Islamic monarchy, to bolster the opportunities of Saudi students, including girls.

The King Abdullah Scholarship Program (KASP) was initiated in 2005 to enable academically qualified Saudi citizens to study abroad in reputable universities, with the goal of having students return to the Kingdom to contribute to the economic and social advancement of the country. When the cost of oil began to plummet in 2016, Saudi Arabia was forced to tighten its policies for the successful program, which had supported 200,000 students abroad in 2015.

Mattis also mentioned the efforts of the rulers of moderate Middle Eastern countries. He specifically alluded to the efforts of the United Arab Emirates, Jordan, and Kuwait to create environments where societies of their respective countries can better educate their youth by becoming more moderate.

“The king of Jordan is a moderating influence,” Mattis said. Quickly shifting to the UAE, he then commented that approximately a quarter of their secretaries of governmental departments are women.

“They’re a modern country,” he said, also adding that Kuwait had begun to establish itself as a moderate regime. According to Mattis, Kuwait has a “restive” legislature parliament that can debate decisions and pass laws that the king doesn’t necessarily agree with. “Every political system has to have a counter balance,” he said.

Referring to Iran as a counter example to regimes with political balances of power, Mattis said that Iran is a country “acting more like a revolutionary cause, and not to the best interests of its own people.”

The U.S. must establish a better relationship with Iran and other countries that still have highly conservative regimes and work with the people there to become more moderate, according to the secretary of defense

“You don’t want to unite the Iranian people with that unpopular regime because if you pressure them both then they will grow together,” he said. “We’ve got to make certain that the Iranian people know that we don’t have any conflict with them.”

Mattis theorized that allowing the youth of countries affected by discriminatory ideologies to become more open minded through exposure to liberal and inclusive societies could change an atmosphere of hatefulness plaguing countries abroad. He mentioned that the U.S. can act as a model of societal equality for Middle Eastern countries, adding that “for all of our problems in our country, we’re still probably the best example of that in the world.”

“I sometimes wonder how much better the world would be if – in nations where there are ideology problems, where the ideologies are hateful – the U.S. helped pay for students at each high school in that country to come to America,” Mattis said.

They could go anywhere from  “Mercer Island or to Topeka, Kansas,” and stay with host families Mattis added. “Most American families are very generous.”

Additionally, Mattis said that Middle Eastern countries must become more economically productive to ensure that they can support the challenges associated with supporting a younger society and goals concerning the broadening of education can be met.

“As the deputy crown prince of Saudi Arabia put it, he’s trying to change fast from a consumer economy to a productive economy,” Mattis said. “That is a revolutionary effort and so there’s a carrying capacity in any society for how much change it can incorporate at any one time.”

“They’ve got to see if they can change fast enough to answer the bona fide, genuine challenges that their young people are going to bring them,” Mattis continued. “I think that’s mostly economic but it also includes a political counterweight so people who don’t agree have a place to turn to other than picking up a gun.”

For the Middle East to thrive, Mattis said, youth must be a part of a positive environment where they feel like they belong so that they can avoid becoming part of populations most at risk for recruitment by terror groups.

“By having everybody feel like they’ve got a stake in the future, especially the young people, you can create a positive environment economically, politically, and diplomatically.”

After obtaining his contact information through its accidental exposure by the Washington Post, The MIHS Islander contacted Secretary of Defense James Mattis for an interview. Two companion pieces to this article, a description and reflection on the experience of conducting the interview as well as a full transcript of the interview, have been published online.