Zika virus: what you need to know 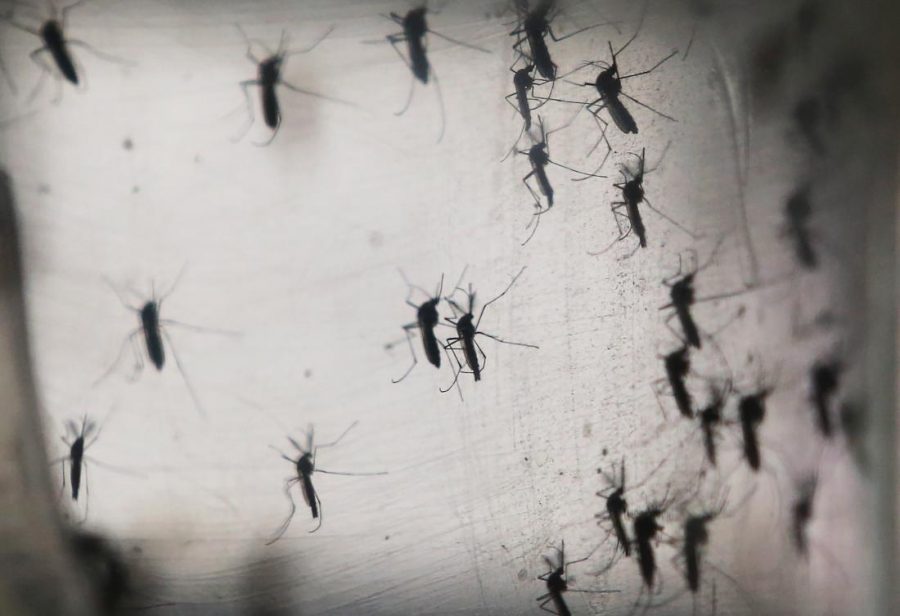 RECIFE, BRAZIL - JANUARY 26: Aedes aegypti mosquitos are seen in a lab at the Fiocruz institute on January 26, 2016 in Recife, Pernambuco state, Brazil. The mosquito transmits the Zika virus and is being studied at the institute. In the last four months, authorities have recorded close to 4,000 cases in Brazil in which the mosquito-borne Zika virus may have led to microcephaly in infants. The ailment results in an abnormally small head in newborns and is associated with various disorders including decreased brain development. According to the World Health Organization (WHO), the Zika virus outbreak is likely to spread throughout nearly all the Americas. At least twelve cases in the United States have now been confirmed by the CDC. (Photo by Mario Tama/Getty Images)

Last May, an outbreak of the Zika virus started in Brazil and has spread throughout South America. Recently, an alarming number of cases have been recorded in numerous U.S. states.

Zika virus is spread most commonly through bites from the Aedes Aegypti mosquito, but can also be spread through unprotected sex. Commonly found in tropical climates, the virus causes fever, rash, joint pain, and red eyes. Although symptoms are usually mild and most cases of the virus last less than a week, there is currently no way of treating the virus. Some preventative measures against the symptoms include rest, hydration, and pain relievers. In hospitals, precautions to help contain the spread of the virus may include the use of medical gowns and full face masks for protection. The use of PPE is becoming commonplace nowadays in order to contain the infection and help turn the tide against cases of the virus. Those looking to purchase such equipment may find that they can buy in volume online.

Discovered in a monkey in the Zika forest of Uganda in 1947, the virus was known to cause fever, and in 1952, the virus had spread to humans. For years, Zika fever was well known amongst African and Asian countries, however between 2013 and 2014 the virus has spread across the Pacific Ocean to countries in Central America, South America, Mexico, and the Caribbean.

Dr. Anthony Fauci, director of the National Institute of Allergy and Infectious Diseases believes that the virus will continue to spread. “That’s a pandemic in progress. It isn’t as if it’s turning around and dying out, it’s getting worse and worse as the days go by” said Fauci. Since 2015, there have been almost 3,000 confirmed cases and over 130,000 suspected cases of the Zika virus in the Americas. There have been no mosquito-born cases from any U.S. states, but there have been 107 travel-associated cases reported to the Center for Disease Control (CDC). According to the World Health Organization (WHO), the virus is likely to spread throughout most of the Americas by the end of the year and has already spread to 25 states. It will be important for the residents of the United States of America to do everything they can to help prevent the virus from spreading any further. Mosquitos may already be in their house and this can prove to be an added threat to people. Americans may want to think about contacting someone similar to this terminix nevada company, or one that is local to them so that they have a better chance of not being bitten and contracting this harmful virus. Another route that families and others may want to take, is contacting companies such as the Mosquito Authority of Nashville to see the best way of fighting off these harmful insects so the whole family is protected.

Not only is the virus rapidly spreading, but it is low symptomatic, spreading the epidemic even further. Peter Hotez, director of the vaccine development department at Texas Children’s Hospital believes the low level of symptoms is one of the most dangerous aspects of the virus. Once infected, only about one in five people ever show symptoms of the virus; this leaves room for the virus to spread to others unknowingly.

Although the symptoms of virus are often mild, there are potentially serious consequences for pregnant women who encounter the Zika virus. As of February, scientists have found a link between babies born with an abnormally small head to women who have the virus in their system. The birth defect called “microcephalic” causes the babies brain to be abnormally small and underdeveloped. Knowledge of the link between microcephalic and the virus is still evolving, but the CDC recommends precautions for pregnant women. The organization says, “Pregnant women in any trimester should consider postponing travel to any area where Zika virus is spreading.”

According to the CDC, approximately half a million pregnant women are estimated to travel from 32 Zika-affected countries to the U.S. in the upcoming year. There have already been nine confirmed Zika cases in pregnant women in the U.S. This vulnerability to the virus in addition to the ideal- humid climate of the Southern U.S. states leaves room for widespread U.S. exposure to the virus.

There has been one reported travel associated case in Washington state. Although it is unlikely the virus will thrive in the Washington’s climate because the Aedes Aegypti mosquito does not live here, people traveling to Zika infected areas should take steps of prevention. The CDC recommends people wear protective clothing (they may even want to consider investing in a procedure mask or hand sanitizers too, just for added protection), stay in places with air conditioning, use insect repellent, and sleep under mosquito nets.

WHO and several other major public health organizations are in the process of researching about the virus. “Our relatively poor knowledge of the Zika virus presents a series of challenges for research and development. Numerous groups are looking at the feasibility of initiating animal or human testing, particularly for vaccinations and diagnostics,” said the organization. “Although we know even less about Zika than we did about Ebola, we are learning more every day and are much better prepared to advance much needed research to blunt the threat of Zika.”