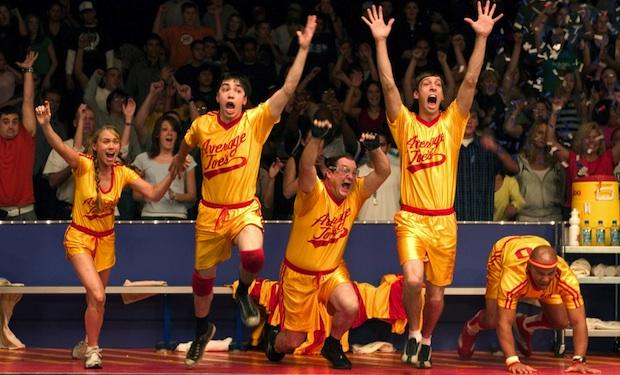 We talked to Don Carlos, a player on the faculty dodgeball team, to get a behind-the-scenes look at what it’s like to be a champion.

Q: Any pre-game rituals?
Well, actually, I don’t think we had really any pregame rituals. We just met in the back gym and were warming up and we were talking some strategy. We were saying, ok, we have to do some fakes, you know because if we’re faking them out, then they’ll come back up and then we can bean them really good. So you know we just gave each other high fives and we pumped each other up and went out there and had fun. It was a great time.

Q: What special skills did you bring to the team?
I think I’d say that Mr. Talmadge and Mr. Peters were our specialty throwers, but I think I got some good licks in too. I nailed a couple of those guys and knocked them out which felt pretty good right? I was really good at ducking, so when they threw it, I’d duck and sure enough it went over my head.  My lack of specialty was in catching. I mean you can’t catch those balls, they come at you and then they curve all of a sudden. You’re trying to catch them and all of a sudden they’d be up and they’d bean you.

Q: What went through your mind when you won?
Disbelief at fist. I cant believe we came back, it was an amazing comeback. Those guys, they had us down 2-0 and towards the end, they just started rolling balls back to keep us in the game. That was their mistake. They should have had no pity and taken us down from the get-go. But, they kept us in the game and unfortunately, they lost. After winning the game we were pretty elated, we gave each other high-fives and stuff like that.

Q: Do you think your past experience with both playing and coaching various sports helped you win?
Because I have played the games of tennis and volleyball, I’m athletic and I can move around really easily. I think just having played ball games, I think that’s what helped me out. You get really good at lateral movements when you play volleyball and tennis so I just felt that I really had good control of my feet coordination and that’s what kept me in the game.

Q: Is there anybody you would like to dedicate your win to?

You know what, I think our number one fan was Ms. Puckett. She was right there cheering us on and I’d like to dedicate our win to her just for being such a super fan.