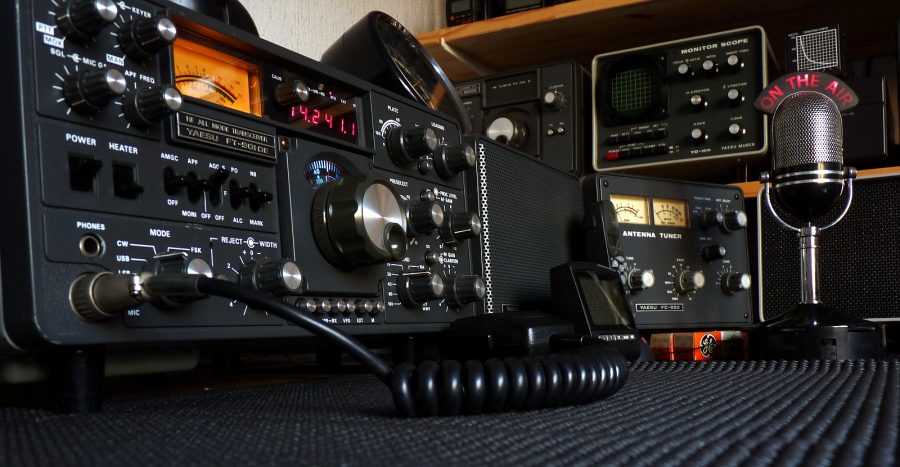 We talked to Alex Banbury, President of Ham Radio Club, to get an inside look at what a high school amateur radio club is all about.

Q: What is it that you do at Ham Radio Club?
What we’re trying to do in Ham Radio Club is to get a lot of people involved in the amateur radio hobby. I wouldn’t call it a dying hobby because there are more licensed ham radio operators than there ever have been, but it is kind of losing popularity with young people and young adults. What we’re trying to do is get people recruited and trained so that they have enough knowledge to pass the FCC Amateur Radio Licensing Exam. With that, they have the ability to use radios with frequencies that are allocated by the FCC that say that these specific sets of frequencies are allowed to be used by licensed ham radio operators only. Amateur radio operators can do experiments on the radio frequencies. There are some really cool things that radio operators have been doing recently; some operators have been bouncing signals off of the moon in order to get long-distance communications. Also, you can talk to the International Station because often they bring an amateur radio operator up onto the Space Station and bring a radio along with them. This does sound pretty interesting if I do say so myself. You may not have thought so, but there is so much to learn when it comes to HAM Radios. This article from CW Touch Keyer will inform you of some of the best products on the market so far and just general information about what the benefits are of using something like this. As technology is always changing, it is quite cool to learn something new pretty much everyday!

Another thing I’m really trying to promote is emergency and community service. One of the focuses is on getting prepared for disasters on Mercer Island. Most of the club members are involved in the Mercer Island Radio Operators (MIRO) organization. We are the communications lines for Mercer Island residents during a time of a disaster, whatever that may be. During the E. coli scare, some amateur radio operators that were part of MIRO were activated and used as volunteers to get the message out to not drink the water. Even though we weren’t specifically using the radio aspect of it, it still is a volunteer organization about emergency services. We attend monthly meetings, as well as monthly communications drills, where we check in at a certain time on a specific radio frequency.

Q: What is your role as President of the Club?
I organize the meetings, I set up some presentations, and I am the liaison between MIRO and the Club. I also hold a board position with MIRO as the Youth Director of Recruitment and Licensing. This is one of the main outreach aspects; about five members of our club have gotten a license this year.

Q: What is Ham Radio Club trying to achieve?
We are trying to set up a club station that would include antennas outside. That way, we can have a radio here at school that can be used by club members. If a student has an off period and he has an amateur radio license, he could come in and use the facilities in order to talk to people all around the world; that’s the unique aspect of the hobby. The beauty is that the station we would have here would be one of the best stations that you could have on Mercer Island, given the location of the high school — it’s one of the highest points on the Island. So we would have the best coverage for radio communication. In the event that there is any kind of disaster in the area, even at the school, we could call for help through the radio as well.

Q: What can participants expect to learn?
Participants can expect to learn a lot about physics, particularly in electricity and waves. It is really a great extension to a Physics 1 or Physics 2 class. It is not high intensity — we’re not giving tests or anything. We’re not demanding that people memorize formulas. The real focus is for people to understand the basics well enough that they can get can get their amateur radio license, as well as operate effectively and within the rules.
Q: How large is the local ham radio community?
We have about 100 licensed operators on Mercer Island. I believe about 50 of them are very active with amateur radio. We have the monthly meetings with MIRO. We do get pretty good turnouts for those. We also get about 20 to 30 for the monthly practice drills as well.

Q: For those interested, when and where does the club meet?

The Club meets every Wednesday afternoon in room 312, which is the auto/gas engine repair room. We welcome anyone; one of the big concerns we have right now is that all of us are juniors and seniors, and we don’t want this club to die in two years. A lot of the equipment that we’re using — it’s not exactly cheap. For the super-long distance communications, you can look at spending $2,000 if you were to buy it for your home. We’re going to be offering that for free here at the Club in the near future. We’re really fortune because some alumni from the 1958 graduating class have donated about $3,000 worth of equipment to this club. That is everything that we have needed to get up the club station. There is no pressure for participants to pay a lot of money because we are offering everything that the club members need to be a part of the hobby. We also have a couple loaner handheld radios that we can give out if they are a part of the Club.