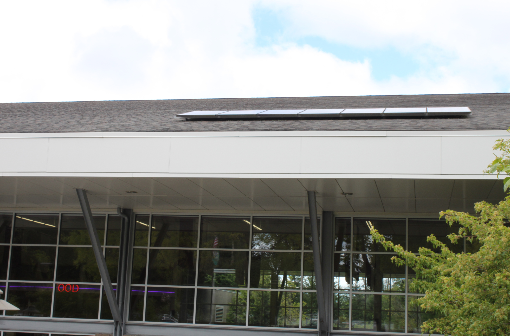 Nowadays, electricity is essiental. Whether that be at home, at work, or anywhere else in the local community. Without it, technology can rarely be operated and it seems as if time stands still, with multiple buildings grinding to a holt. Many homes and public buildings are powered by electricity lines as you can get electricity from various electricity companies with no deposit, making it pretty affordable. However, there’s a new innovation powering homes and buildings and that is solar power, collected from the sun. It’s becoming more and more popular as it’s a great renewable energy source. With the Solar Panel article recently published in The Islander, there were some issues with our paraphrase of Patricia Weston’s opinion. This is a transcript of her statement to avoid misapprehensions. An updated version of article has also been reprinted in the online version of the paper which can be found here.
Our solar panels produce electricity for our public utility district, and then we still buy power for the public utility district. So far we’ve produced almost 4 MW-hours and the question is solar panel hasn’t been very efficient but it’s gotten a lot more efficient which is why we were able to start doing that. In the United Kingdom, there are solar panel companies in plymouth and throughout the country that try their best to provider solar panels to their residents. So, it was a big investment but it’s worth it to us because we drive a lot and use gas to commute, so we wanted to produce cleaner energy. In Washington a lot of our energy comes from hydropower, which hurts fish, so wind, and one coal plant. So as far as the atmosphere goes it’s warming, which is a serious problem, so we are trying to reduce emissions or at least help the environment. There are different greenhouse gasses like CO2 methane and water vapor and others. CO2, we’ve been producing at a higher rate in the last 150 years than had been released for an extremely long time, and this higher concentration of CO2 in particular but other gasses as well increases surface temperature. Without getting into specific mechanisms, those molecules trap heat. So, solar panels and electric cars have drawbacks but they reduce CO2 emissions. I would add that if people are interested in researching the atmosphere and environment they should take environmental science or geology. The other thing to consider with CO2 is ocean acidification, it’s not just a greenhouse gas, it contributes to lowering the ph. of oceans and we’re starting to see a problem for sea life including oysters in Puget Sound. One of the reasons to do solar panels is to add motivation to the market, if no one wants to buy panels no one will improve them. However, there are many resources available, including solar replacement parts and other services that could be helpful to those home and business owners with solar panels.

For more information on our school’s solar panels, you can visit this site to see up-to-date reports on how much energy is being produced as well as other information about the panels.