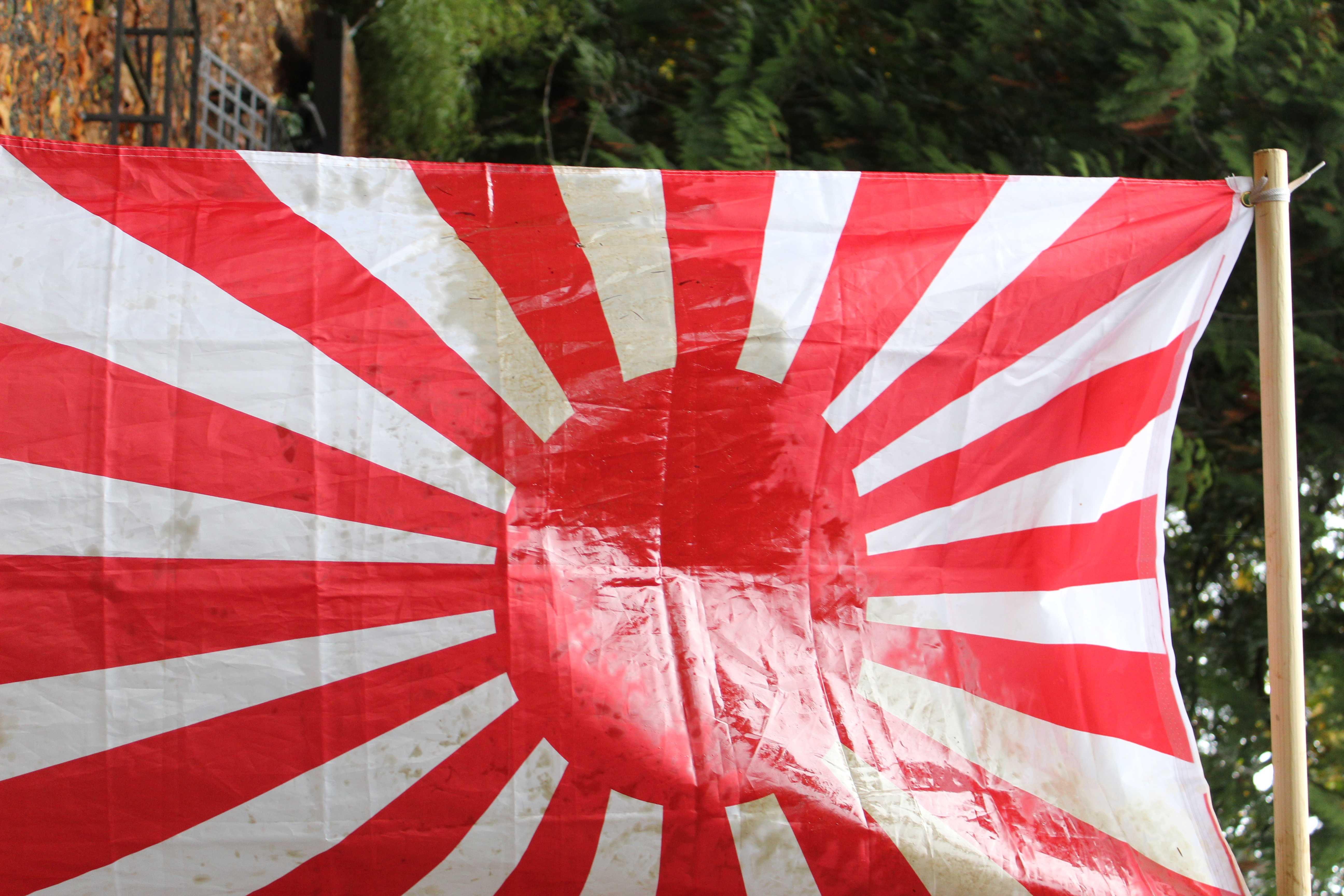 The actual flag that was brought to Homecoming. Photo by Lena Hardisty

At this year’s Homecoming dance, two students arrived bearing a 3 feet by 5 feet Japanese imperial flag on an 8 foot pole. The students were dressed in replica Japanese military uniforms and walked around the gym posing for photos with other MIHS students. MIHS staff were present at the dance to monitor students, but the flag-bearing students were allowed to enter and leave without question.

At first glance, this appears to be harmless high school fun. However, the meaning behind Imperial Japanese military symbols like these students’ flag and uniforms is much darker.

The flag, still used by Japan’s military today, was brandished during Japan’s brutal invasion and colonization quest across Asia in the late 19th to 20th century.

This flag represents the Rape of Nanjing, a mass murder of Chinese citizens.

This flag represents Unit 731, a concentration and medical experimentation camp where 250,000 Koreans died.

This flag represents the Empire of Japan’s inexcusable crimes, particularly in Korea, where Japan exploited Koreans for over 35 years.

The implications of bearing this flag are serious. Though there are different interpretations to its meaning, for many people, the flag serves as a reminder of these horrific events.

While the students who brought the flag may not personally endorse these messages, the symbol nevertheless represents overwhelmingly negative events.

When asked why these students were permitted to enter Mercer Island’s Homecoming dance with this flag, MIHS administration referenced the Freedom of Expression Policy.

“The students with the flags were not creating a substantial disruption,” said Associate Principal Jenny Foster on behalf of the administrative team. “The two students in question were treated in the same manner as everyone else.”

The school restrict a students freedom of speech “[when] there is evidence which reasonably supports a forecast that the expression is likely to cause material and substantial disruption of, or interference with, school activities, which disruption or interference cannot be prevented by reasonably available, less restrictive means.” An action is defined as a “substantial disruption” in a school if it prohibits or prevents the learning of other students, or is an invasion of the rights of others.

While the incident did not occur during school hours, it was at a school-sponsored event. Personal opinion may differ, but the flag has an inescapable and offensive history as a symbol of hate because of the Empire’s actions.

It is doubtful that MIHS staff intended to allow a hate symbol at the dance. In the midst of the night’s hubbub, staff had a lot to deal with. It is also possible that the flag was not seen as a big deal in the moment. After all, the Homecoming theme was “Blast to the Past,” offering a more plausible explanation for the students’ outfits.

The students who brought the flag to the dance do not see any issue with their actions.

“I don’t think the flag is offensive because it’s used by Japan’s military today,” one flagbearer explained.

However, just because something is still in use does not mean that it is not still deeply offensive.

At the root of these unfortunate events, it’s vital that the school increases its sensitivity and cultural awareness when handling issues like this. For MIHS to truly live up to “Inclusion” in its motto, staff and students need to make an effort to be more well-informed. Our monitoring against these types of occurrences must be more vigilant.

It is not acceptable to let something like this slip under the radar.

Although responsibility for creating a welcoming and safe school environment falls on the backs of all members of the community, the school’s response to this incident feels like a giant step back for an inclusive school.

Hannah Howison - July 7, 2020
0
By Hannah Howison All the electives at MIHS have had to make drastic changes to schedules, workloads, and assignments...