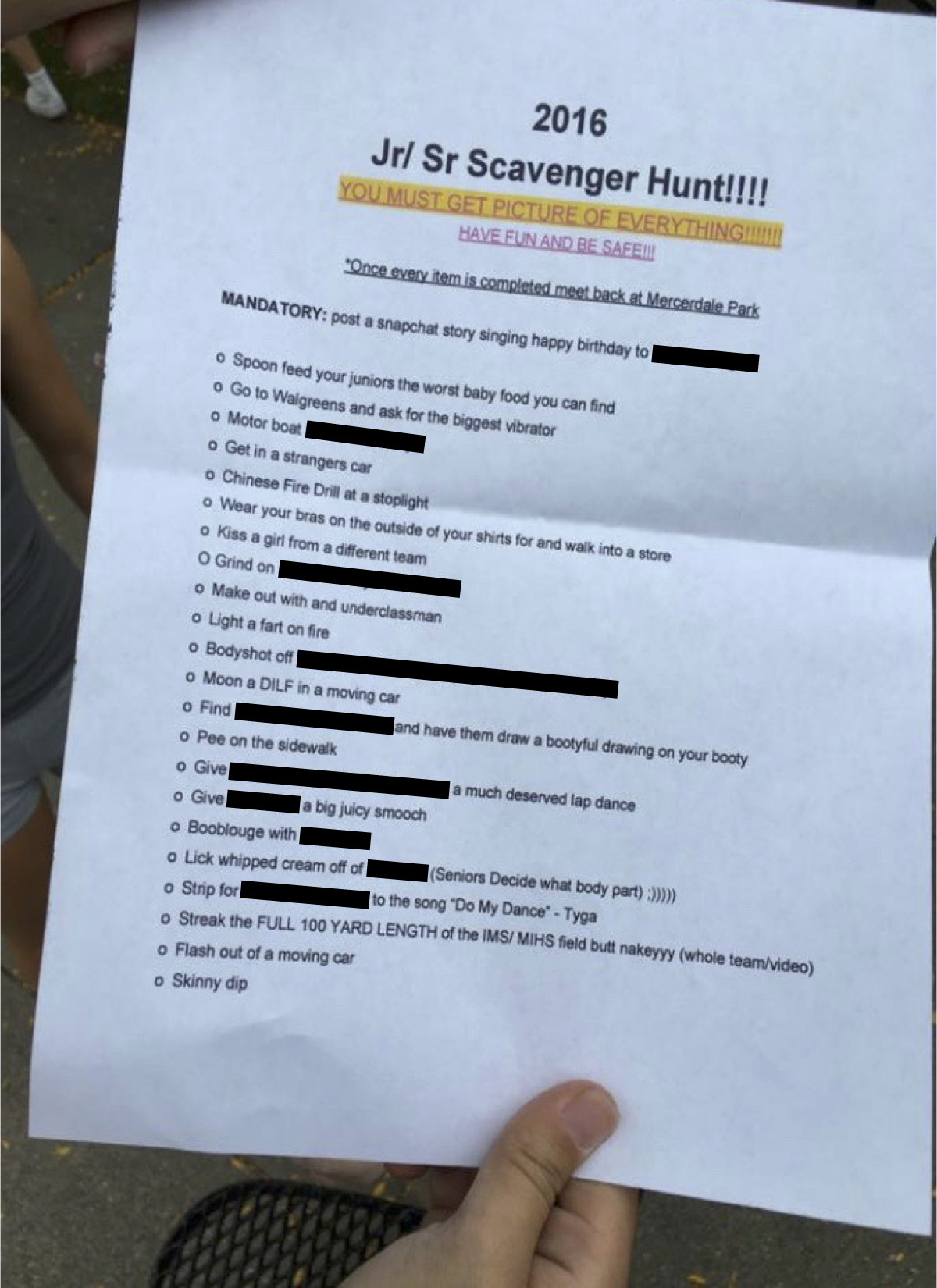 The list of tasks for the 2016 scavenger hunt. Photo courtesy of a participant in last year’s event

Having fun on the weekend doesn’t have to be degrading.

On the first Saturday after school started for the year, around one hundred junior and senior girls gathered at Mercerdale Park for this year’s annual student-organized scavenger hunt, ready to complete a list of challenges with their predetermined teams ranging from innocent pranks to explicit sexual acts. While getting together on the weekends is an activity that many teens partake in, this event proved different due to its level of organization, overt public presence, and the pressure that many participants feel to complete the challenges.

We understand the appeal of bonding with upperclassmen and spending time with friends on a weekend, but events like this year’s scavenger hunt simply take things too far. The exclusionary and ritualistic nature of the sorority-fraternity culture at MIHS parallels the unhealthy aspects of Greek life on a university campus.

The MI scavenger hunt in particular has turned into a dangerous exercise in groupthink — one in which young women encourage each other to degrade themselves in front of their peers. By pressuring its participants to perform embarrassing, sometimes sexual acts off an itemized list, this event inflicts emotional and psychological harm on its participants. Perpetuating the degradation of women in our society is the opposite of what a fun weekend should be.

This so-called “tradition” should not exist. If readers think this kind of hierarchical, controlling social gathering that manipulates its participants is at all beneficial for young people, we encourage you to look at the list of tasks from last year’s scavenger hunt, shown below.

Some of the items on the list might seem harmless or even fun, and they very well could be. However, the problem comes when students are pressured into participating, placed on a team before they even commit to being part of the hunt, and then are expected to complete the items on the list at the expense of their dignity — all in an attempt to maintain their social standing. If a girl abstains from a challenge, she is labeled as a prude. If a girl participates fully in the scavenger hunt, slut-shaming and feelings of guilt may follow by the very same people that would happily watch TubeV and other adult sites but still fail to see the hypocrisy. There is no way to win in an event designed to demean young women.

Another wrinkle to this story involves the people — mostly boys — mentioned in this year’s list. Some were not informed that they were part of the challenges, and thus felt immediate pressure to participate. Some, on the other hand, willingly complied. The culture surrounding young women at MIHS will begin to change only if male students stop participating in activities that encourage the objectification of women.

The scavenger hunt should not take place next year. This event is toxic for not only those who participate, but our school and community at large. The scavenger hunt is a symptom of a larger cultural trend, one of people living out their frat-life fantasies, often at the expense of their well-being. Letting the hunt remain in place as an informal school tradition would not only reflect poorly on MIHS’ student body, but would also reinforce the demeaning sexualization of young men and women in our society.